Back in March I wrote about how important Web of Trust could be for skeptical outreach.

A few recent developments have made it even more useful, and in fact have even made it urgent that skeptics be involved in Web of Trust in a big way.

You can read about what Web of Trust actually does at the original post, but suffice it to say is it is a browser-based gadget that warns you when you are about to visit a dodgy or malicious web site. Since skeptics are fundamentally all about warning people about misinformation anyway, it is right up our alley.

These new developments are all about reach. We are always looking for better ways to reach more people, and in my post I pointed out that Web of Trust had millions of users. Well, it gets better. Read on to find out how much better.

First of all, WOT announced in April that they had surpassed 20 million downloads of their software. That means that the 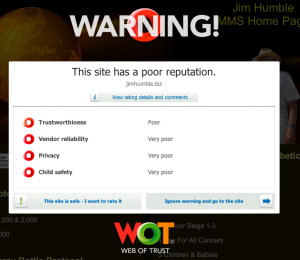 automatic warnings about (for instance) Jim Humble’s ridiculous MMS product (example at right, click to embiggen) are automatically being pushed to all of those 20 million people. That’s a fantastic reach that goes far beyond (as far as I know) what any other skeptic magazine, blog, podcast or TV show is currently achieving.

But 20 million is still just a fraction of the total number of users online, any of which might be falling prey to bogus pseudoscientific claims at any moment. Is there any way to reach more people with this service? Actually there is.

A big part of how web links get passed around these days is through social media sites like Twitter and Facebook. Instead of emailing links, users often post them on these sites and their friends can automatically access them on their computer, tablet or even on their smartphone.

Facebook is the 300 pound gorilla in this area, and they list some very impressive statistics regarding the size of their site, including:

Due to this tremendous size, Facebook has become a big target for scammers and cyber criminals, who try to get users to click on malicious links. Because of this ongoing problem, Facebook announced in May that they are integrating Web of Trust into their linking system. This integration is now operational, so if you click on link in Facebook that has a low WOT rating, you now get this warning screen:

This is a fantastic wake-up call for anyone clicking on a link. But there is a down-side.

The tremendous reach of Facebook is a double-edged sword. These warnings are shown to everyone, including true believers. That means the owners of pseudoscience and paranormal sites are going to start paying attention to WOT, where they might not have even known about it before.

Alert skeptics are already beginning to see this. The infamous Meryl Dorey of the Australian Vaccination Network recently posted a rant about the Facebook WOT integration on her organization’s Facebook page. She’s attempting to rally her supporters to vote up AVN’s website in WOT.

This is going to happen with any low-ranked believer sites who have a Facebook presence, as they notice that their links are being blocked. Now as I noted in the original blog post on WOT, only a small percentage of pseudoscience & paranormal sites already have low WOT ratings. But I also noted that many of those ratings have low confidence values and thus might be changed with a bit of effort. (Web of Trust is not merely a voting system, but uses Bayesian statistics to develop confidence values based on user reputations. In English: new users in the system are unlikely to affect ratings much at first, but users who stick with it and rate many sites will).

This is why I say it is urgent that as many skeptics as possible get involved with WOT. Its newly enhanced visibility is going to increase the likelihood of abuse.

You can help! Install the software and start rating sites of all types. Build up a history on WOT so the system trusts you.