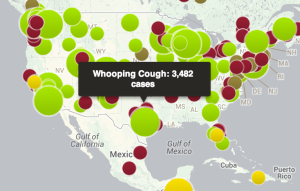 If you follow the problem of vaccine denialism (like most skeptics do) and are on social media, you probably saw a cool interactive global map of disease outbreaks this week. It was created by the Council on Foreign Relations – there’s a picture of it here and a link below the fold.

Just in the last week it was posted by many major websites including Kottke.org, Mother Jones, L.A. Times, The Verge, Wired, The Atlantic Wire and even Forbes. And of course all those posts – and the direct link to the map – were being wildly passed around on social media.

Whenever I see something like this going viral, I dig a little bit before I retweet or repost it.  Sometimes there’s a better version of the post to link, or the one you saw didn’t attribute it to the original author correctly. I like to make sure I send out the best possible version of something, not just the first one I saw.

When I dug into this vaccine preventable illness map, I found out an interesting thing that almost all of the major media posts missed. Namely, this map is not new.  In fact, it’s over two years old – it was released in late October 2011 as this press release indicates.

So why the heck is it going viral now?

The thing that got everyone’s attention was this interactive online map of vaccine-preventable outbreaks worldwide.  Below is an animation of it showing the outbreaks from 2008 through 2013:

The map uses the Google Map API and is fantastically interactive. Each outbreak has data behind it, you can drill down, zoom to particular areas of the world or times, focus on particular diseases and so on.  Click the graphic above or this link to explore. The map can be embedded, you can download all the data behind it, and you can submit new outbreaks to be added.

It is easy to see how this would be very interesting to folks concerned about vaccine denialism. It is no wonder it went viral.  But why is it going viral now?

I started seeing the Twitter activity the week of January 20, and here are the major media outlets which created posts about it at that time, and who they credited. (There are no doubt others now, this isn’t an exhaustive catalog).

So you can see 8 of these posts can be traced back to the Kottke.org post, which credits a Twitter user. We have to go to Twitter for the path prior to January 16.  (And in the process we’ll find the likely source of the other two posts).

Fortunately, Twitter has a little known feature that you can paste URLs into the search box, and it will find posts of them even if individual Tweets are using URL shorteners on the link. So we can use that to augment when people directly credit each other and find where the ball got rolling.  Here’s the sequence going backward starting with @Jopearl:

This map of vaccine-preventable outbreaks, from the Council on Foreign Relations, is amazing. (via @clarajeffery). cfr.org/interactives/G…

@ClaraJeffery has 17,000 followers (and is the Co-Editor of Mother Jones) and as you can see she got a ton of retweets. But where did she get it?  Well she also retweeted this  immediately before, giving us a clue:


Interactive map of vaccine-preventable outbreaks around the world. Not surprisingly, rubella dominates in Japan. cfr.org/interactives/G…

And what about Business Insider (and therefore io9)?  The Business Insider post was written by Lauren Friedman, who is @fedira on Twitter. For public Twitter accounts you can examine who each person follows, and I found that @fedira follows @ClaraJeffery.  Voila, she was inspired by the same sequence of tweets, one step earlier than Kottke.

But the trail goes cold there with @MariInTokyo.  I contacted Mari Armstrong-Hough who is a professor at the School of Political Science and Economics at Meiji University in Tokyo. She told me she wasn’t sure who she had gotten it from.

She didn’t recall that, though she said she does follow @Laurie_Garrett of CFR. But @Laurie_Garrett didn’t tweet about this until about an hour after @MariInTokyo. Armstrong-Hough told me she sometimes uses this map as a “teaching tool for undergraduate seminars” so she was already aware of it.

According to Twitter search, Seth Berkley was the first person to tweet this map on January 15, and nobody tweeted it at all in the two days prior. Tweeting of the link is pretty steady after January 15.

So why did Berkley tweet it?  Well that’s easy to discover with a little searching.  Again using Twitter URL search (and quite a bit of scrolling) if we simply look for the very first tweet of this map ever, a few days after it was released, we find this:

There are outbreaks of #vaccine preventable diseases on every continent. Find out where they are occurring: ht.ly/7aqQ0

That’s Berkley’s organization, and that’s not a coincidence.

If you use Google to search CFR’s website for Berkley’s name, you find it in their global health program. CFR had a roundtable meeting at the time of the map’s launch titled “Losing Ground in the Vaccine Fight? Denialism, Measles, Polio, and Mumps – Old Scourges and New Problems” at which Seth Berkley spoke, you can read the transcript at that link. (There is also an audio recording of that session in MP3 format). So clearly he was involved at the time of the creation of this map.

Certainly once this map started gaining steam virally, one can imagine it would have found its way to the blogs somehow – via one or another of @GAVISeth’s 35 retweets or especially @ClaraJeffery’s several thousand retweets.  But although Professor Armstrong-Hough was never retweeted, it is clear that it was her tweet (to fewer than 300 followers) is what triggered Clara’s tweet and the rest of the chain leading to the reaction in the blogs I documented above. When I pointed out how key her tweet was, she commented:

Honestly, when I tweet about public health data visualizations I usually feel like I’m tweeting into the void. I snap a random picture of a funny book at a train station in Tokyo and get 50 retweets… but tweet about a great empirical resource or health data visualization? Maybe a fellow academic responds or retweets, but that’s usually it. I still do it because it’s important and exciting and I want to be a good science communicator, but the disparity in reactions to fluff about where I live versus the work I care about can be dispiriting. It’s nice to know that sometimes things really do get out there because a butterfly flaps its wings.

Keep this in mind when you are using social media. Even if you have few followers, and you seem like you are talking to no-one… occasionally a retweet is like a butterfly flapping its wings.

And check out that map, it’s a great tool for talking about the importance of vaccination.

Updated again: Laurie Garrett of CFR says the map has seen nearly half a million visitors in the last 10 days!


Jaw-dropping 500,000 people have visited our #Vaccine map on @CFR_org over the last 10 days. See why: cfr.org/interactives/G… @GAVIAlliance

32 thoughts on “A butterfly flaps its wings on Twitter, and a vaccine map goes viral”