Susan Gerbic contacted me the other day. She was confused by an unsolicited message she had received from none other than Deepak Chopra on Twitter. To save you the click – it’s just a bare URL in a tweet, no other explanation. Presumably Chopra wants Susan to read that blog post?

More on that later, but I told Susan I’d seen odd behavior before in Chopra’s Twitter feed. He sometimes seems almost obsessed with the idea of getting those who criticize him to read his columns and blog posts. I had made a note to myself to investigate this as part of my bad behavior series. I thought it would be an interesting follow up to my previous post about Deepak Chopra’s employee acting as his sock-puppet on Wikipedia.

It used to be that digging around in old tweets was very difficult, because Twitter’s search function only went back a few weeks. But last year Twitter enhanced search to include years of old tweets. Using Twitter’s advanced search function (which has also been recently enhanced), I dug deeper into Chopra’s Twitter feed to see how often he does things like this.

What emerges is a sad pattern of a man who has almost 2 million followers (and a verified account!) acting as if it is vitally important his followers see that he is debating with certain key atheists on Twitter. He also seems bizarrely obsessed with getting certain people to read his blog. In the process I believe he’s skirting the Twitter rules on spam, and encouraging bad behavior in some of his co-authors as well.

So let’s use that enhanced Twitter search and look a little deeper….

For those not familiar with Twitter- a “mention” is the way you start or continue a conversation in that site’s parlance. By including someone’s Twitter handle in your message, immediately preceded by an @ sign, you cause Twitter to notify that person of your post. Naturally, if one receives a large number of these “mentions”, it can become quite annoying.

Back in 2011 the infamous character “David Mabus” harassed thousands of people on Twitter by abusing this function of the service. Other abuse of this functionality has resulted in the creation of The Block Bot. And in one of my older “bad behavior” posts I reported on a group of atheists who were whining about being suspended on Twitter who had actually brought it upon themselves through abuse of this feature.

As you would expect, Twitter has very specific rules regarding mentions.  Here’s a relevant passage:

Spam: You may not use the Twitter service for the purpose of spamming anyone. What constitutes “spamming” will evolve as we respond to new tricks and tactics by spammers. Some of the factors that we take into account when determining what conduct is considered to be spamming are:

There’s a long list there, but two items in the middle of the list are germane today:

Violations result in Twitter displays the following message when you next attempt to use the service:

You are then prompted to pledge to change your behavior after reading the policy.  If it happens repeatedly, your account is permanently suspended.

You don’t have to go far down Deepak Chopra’s twitter feed most days to find him mentioning one or another of the so-called “New Atheists” in a tweet. A casual observer might believe that Chopra is constantly having conversations on Twitter with them, debating and exchanging ideas.

But a click or two quickly shows that these tweets are very rarely part of conversations. They are one-sided affairs instigated by Chopra and rarely if ever reciprocated. The one exception is PZ Myers who has tweeted at Chopra about the same number of times Chopra has to him.

In fact, dating back to 2010 there are well over 1,000 separate mentions (in over 850 tweets – he often mentions multiple people per tweet) from Deepak Chopra to the seven. He’s only ever gotten just over 50 mentions in return.  That’s a ratio of something like 18 or 20 to one, depending on how you count. I’m not Twitter’s enforcement department, but in my humble opinion that looks like spam or abuse to me.  Although some of these tweets date back to 2010, the frequency has markedly increased since January 2013 and continues to this day.

Three of the people involved have never @-mentioned Chopra on Twitter, even once (Coyne, Dawkins and Dennett), as far as I can find.  Indeed, it only takes a quick look at their feeds to notice that neither Daniel Dennett nor Jerry Coyne ever reply to anyone – they merely use their Twitter to post announcements.  (Coyne has clearly stated this on his blog).

Surely Chopra must know this. Which raises the question – what is he trying to accomplish, and is he being disingenuous about it?

“Attempt to bring attention to a service or link”

A third or more of these tweets from Chopra contain links, often to Chopra’s latest blog post. It would appear he wants the seven men to read his writing. Here’s an example:

Richard please respond !Can a Shift in Consciousness Cause a Shift in Biology? : DeepakChopra - goo.gl/alerts/q6MM @RichardDawkins

Used sparingly, this is a valid technique on Twitter. It can even be considered a courtesy if that person is mentioned in the post. I’ve done it myself. But in my opinion Chopra takes it to an extreme, even doing such things as retweeting himself.

Another way Chopra abuses this is by retweeting the same link to multiple people over and over. Notice here how he repeatedly tweets the same video to Jerry Coyne (along with some others) back in November:

This type of repetitive tweeting of links is exactly what Twitter is referring to in the rules when they use the phrase “an aggressive attempt to bring attention to a service or link.” It’s exactly what got hundreds of Twitter accounts disabled for David Mabus.

Further, Chopra has admitted his tweets are mean spirited, and I would tend to agree.  Here’s a sample:

You got it ! Coyne is incapable of abstract thinking , bamboozled by his conditioning @TiaDobi @Evolutionistrue

I’d guess it is unlikely that Twitter would disable a verified account over this sort of thing, so Chopra is probably safe here. But it’s still can be quite annoying for those on the receiving end of it.

If you recall from the previous post about Chopra’s Wikipedia conflict-of-interest problem, last November Chopra wrote a four-part article titled the “Rise and Fall of Militant Skepticism”, which various people including Steven Novella and Jerry Coyne savagely critiqued.

Chopra’s co-author on that series was Jordan Flesher, a young psychology student who apparently has learned his Twitter habits from Chopra. What’s immediately striking about Flesher’s timeline is how Chopra-focused it is. He retweets Chopra constantly, and very often tweets pleas to major atheists to read some article or another, very similar to Chopra’s:

Again, not a crime. But he abuses the courtesy of calling posts to people’s attention because they are in them, as you see from this exchange:

@troyofis I am not referenced in your article. If you want to refute "skepticism" you might try reading Skeptic magazine or any of my books.

And like Chopra the sheer volume of his posts seem excessive to me. Just since June of last year when he started, Flesher has tweeted to the same seven people over 96 times, and only Sam Harris and Michael Shermer have ever replied – and only 15 times between them.

Mr. Flesher seems to have picked up Chopra’s mean spirit as well – and then some. Among other things, he’s called Coyne’s worldview ignorant, and tells Dennett he’s a disgrace:

@Evolutionistrue PLEASE read this article that @DeepakChopra wrote! It blows your ignorant worldview to smithereens! m.sfgate.com/opinion/chopra…

@danieldennett - As a young graduate student and academic, I just want to say that you are a disgrace to academia as a whole.

(And remember – neither Coyne nor Dennett ever reply to anyone, so he there is zero likelihood of a reply to these antagonistic posts). These are not good habits to learn on Twitter when your account has only a few hundred followers. If I had psychic powers, I’d predict a Twitter suspension in Mr. Flesher’s future.

I believe Deepak Chopra is being disingenuous by constantly posting to these people. While it is true that he has debated some of them face-to-face, for instance Dawkins and Shermer, surely he has noticed by now that they never reply to him on Twitter. Thus the posts serve only the purpose of “show” for his own followers.  The mean spiritedness of some of the posts seems to be part of that.

Meanwhile, he is pushing the limits of what Twitter clearly defines as spam, in his ongoing efforts to get these people to engage with his writing. He repeatedly tweet the same links over and over in violation of Twitter’s clearly stated rules.

It’s really kind of sad. The rest of Chopra’s Twitter feed (the part where he’s not selling something) is littered with exhortations to be at one with the universe and to be calm and peaceful. Too bad he doesn’t listen to his own advice, and realize that it really doesn’t matter to the universe if Richard Dawkins reads his latest blog post.

Oh and remember that link that Chopra sent to Susan Gerbic? Susan was confused because the linked article didn’t mention her or Wikipedia. Chopra had written about Wikipedia that week, but apparently accidentally pasted the wrong link into the Twitter reply! I called him on it, but he never replied to me:

Update Friday May 23: I guess this tweet by Chopra is a response? He didn’t spell my twitter handle correctly so I didn’t see it until someone pointed it out to me:

@krelnicnik glad you’re a fan of my tweets. I will make sure to include you when I send them out—
Deepak Chopra (@DeepakChopra) May 23, 2014

Second Update Friday May 23: Chopra apparently thought the better of it and deleted the above tweet, which formerly resided at the URL https://twitter.com/DeepakChopra/status/469864003481919488. Here’s a screen shot courtesy of Jo Brodie on Twitter: 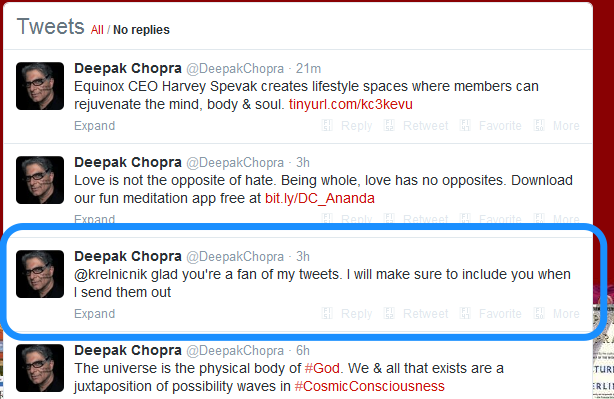