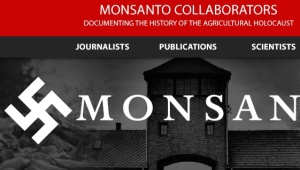 I know I haven’t been keeping up with the blog here. As you can tell from the top menu bar and my social media feeds, I have a number of different projects and sometimes it’s hard to balance them all. Plus I have some cool new super-secret projects in the works that are taking up my time. And I do have a day job too!  But fear not, I have several posts that I’m working on for this blog and activity will pick up soon, especially as we ramp up into DragonCon at the end of this month.

But for today I just wanted to offer some kudos to another blog where an investigation appeared last week that would not have been out of place right here on Skeptools. Nick Price, posting at the newly-launched blog This Week in Pseudoscience looked into a controversial post by Mike Adams (the so-called “Health Ranger” who many skeptics call the “Health Danger”).

You’ve probably heard about Adams’ post, many other skeptics and journalists including Keith Kloor, Paul Raeburn, Steven Novella and David Gorski have blogged about it in the last week. Essentially Adams goes on yet another anti-GMO screed which is almost entirely a violation of the Internet’s famed Godwin’s Law.

But this investigative post I’d like to highlight here focused not on the contents of the screed but the provenance of the companion website monsantocollaborators.org. Originally Adams speculated someone should create such a site. But then, in a blog update just shortly thereafter, the site had magically appeared!

Price dug into the WHOIS records for the domain in question, and found that it was actually registered before Adams posted his blog!  He wrote:

There is one thing that whoever set up this site wasn’t able to do; while he was able to register the domain overseas and make the actual owner private, he could not hide the date and time that the domain was originally registered.  NaturalNews does not provide timestamps on their articles, so the best way to determine when something is published there is to see when they share it on a different site.  The article was originally posted to Facebook at 23:05 GMT on July 21st, and the first comment on the article itself was at 23:15 GMT, but MonsantoCollaborators.org was registered at 16:21 GMT, over six and a half hours before the article went online.  This could also be a coincidence, but I can find no evidence that this article was online prior to 23:05 GMT on the 21st of July, whereas the domain was registered at 16:21 GMT on the same date.

That’s right – the companion website that Adams tried to claim was set up by one of his readers without his involvement, was actually registered six hours before Adams posted the article in which he made that claim. Has Adams invented time travel technology? Or is this an utterly amazing coincidence?

It seems to be pretty damning evidence, but the blog goes on to extensively analyze the HTML code of the site and compare it with the code on Adams’ own sites. They find that there are several uses of tags and scripts on the page that certainly point to a web developer with extremely similar tools and preferences. Nick is a good skeptic, though, and take pains to point out:

If you are skeptical of my claims, that’s a good thing.  I have not offered absolute proof of any of my theories, and I’m sure that Mike Adams will say that this only proves that it was a ‘sophisticated false-flag attack.’  I only ask that you apply that same skepticism towards other articles that you may be more inclined to believe without questioning.  As for me, I really hope that someone sees this article and adds my name (Nick Price, like the professional golf player) to the list of collaborators.  It’d be an honor.

Since the controversy arose over Adams’ original post, the mysterious collaborators site has been deluged with hits and now only displays an error message if you visit it:

Note that Nick was clever enough to make sure that the site was archived in at least two places including The Internet Archive and WebCite – see my earlier post on how important web archiving tools are for skeptics.

Kudos to Nick Price and the other folks behind This Week in Pseudoscience for a great use of skeptical software tools to expose the latest foolishness from this quack.  Do read Nick’s entire post, and you can keep up with the continuing controversy over this Adams post over at the Genetic Literacy Project which has posted multiple times.

I also discussed Nick’s investigation in last week’s episode of Virtual Skeptics here, my segment starts 35 minutes into the episode.