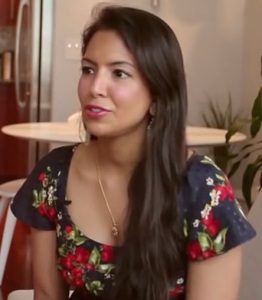 Vani Hari by the Charlotte Video Project, licensed CC BY 3.0 via Wikimedia Commons.

Vani Hari, aka “The Food Babe,” has been a recent repeated target of criticism both from skeptics and the mainstream media.  She has not taken this criticism well, lashing out at her critics.

She has also been caught deleting content from her social media pages and her own website after it became the target of derision. This is not new to skeptics; it happens all the time. That’s why I’ve recommended on this blog that all skeptics be very familiar with the use of web archiving tools. You never know when the content you criticize might be “disappeared” by its embarrassed author, so it is always good to have a copy safely archived.

But Ms. Hari (or her technical staff or SEO consultant) have noticed this, and have started taking measures to thwart skeptics. In November 2014 they made a change on her web server that prevents skeptic use of the most popular archiving tool, the Internet Wayback Machine, for her site.

And just this week they have attempted to prevent skeptics from using another tool that entered our arsenal right from the pages of this blog – Do Not Link.  This is a URL shortener I recommend for linking to pages you wish to criticize without giving them a “Google boost.” Last week the Food Babe made a change that would cause any Do Not Link URL to the site to fail to arrive – denying her own site readers while annoying skeptics.

But this latest technical measure has completely failed. Read on as I explain what they did, how you can work around it, and why measures like this will always fail.

The Rise of the Food Babe

The Food Babe is known for being anti-GMO, pro-organic and a promoter of chemophobia – fear of chemicals and toxins. She’s famously campaigned against major restaurants, food retailers and manufacturers about allegedly dangerous ingredients in their products. But her campaigns, more often than not, egregiously confuse the science involved. For example, she claimed at one point that common brands of beer contain propylene glycol, which is used in some industrial products like some antifreezes. But she had misread the ingredients list – some beers actually contain propylene glycol alginate, a completely different substance. The latter is a food additive derived from algae or kelp that has been in use for over a century. Just because two chemicals have similar names, that does not mean they have similar effects.  This is just one of many examples of key issues that Food Babe has gotten wildly wrong.

Her blog has been around since at least 2011, but she started getting significant media attention in late 2013 and early 2014, as you can see from this Google Trends graph of searches for “food babe”:

This increase in attention for her has, of course, led to increased scrutiny of her claims. Over the above period she’s been the subject of takedowns by such skeptics as Mark Crislip, Steven Novella, Orac, Joe Schwarcz, David Gorski, Sharon Hill, Kavin Senapathy and Guy Chapman. There have also been significant critiques of her statements and methods in mainstream media outlets such as Forbes, Bloomberg News and NPR.

When confronted with a seemingly new source of pseudoscience, skeptics often dig deeper for more examples. Several of those critiques dug up older posts from the Food Babe blog as further exemplars of her misunderstanding of science. In particular, a 2012 post about “Why It’s Time To Throw Out Your Microwave” came under fire for some rather ridiculous claims – including repetition of Masaru Emoto’s claims about speaking positive and negative words to water. (Steve Novella wrote an entire post about this, but Mark Crislip, Guy Chapman and others also addressed it in their articles).

After several of these critiques had appeared, Hank Campbell at Science 2.0 noted in July 2014 that the original microwave post had been taken down. But he archived a copy of the post right there on his site for future reference. (Another copy of the post is archived here at Archive.today).

Several bloggers also picked up on an even more ridiculous post she made back in 2011 titled “Food Babe Travel Essentials – No Reason to Panic on the Plane!” In this one she gets it completely backwards how pressurized cabins on an airplane work, and even misunderstands the chemical composition of our planet’s atmosphere. She took this article down too, but in similar fashion it has been archived (in some cases from the Google Cache) here at Science2.0, here at Skeptical Analysis and here at Archive.today.

Shutting Down Caches and Archives

Deleting embarrassing or critical content is a standard tactic, so skeptics are used to it. A skeptic technique to compensate is to turn to Google’s cached copy of the page, or to grab an archived copy via the Internet Wayback Machine. Many of the aforementioned critiques of those old posts used links like these instead of the now-deleted originals.

Meanwhile criticism of the Food Babe continued to build. Public criticism was reaching new peaks in late October and early November as she made speaking appearances (for which she was paid $6000 but after which she refused to take questions) and wrote an op-ed at the New York Times. It was right around this time the Food Babe took action to stop skeptics from further criticizing deleted posts on her site using those cached copies.

There are published procedures at Google to request cached copies of your content be removed. We can’t know for sure whether Food Babe requested removal from the Google Cache – that’s between her, her staff, and Google. But this Reddit thread seems to indicate the cached versions of her pages started disappearing around November 11, 2014. The fact that other pages on her site continue to be cached by Google suggests the removals were specifically requested.

But the equivalent procedure published by the Internet Archive for removal on that site is not so private. It requires the webmaster to change a file called robots.txt on their own server. And that’s a setting that anyone on the Internet can directly inspect!  Sure enough, here is what the robots.txt for foodbabe.com looks like right now:

The last two lines are the lines that prevent the Internet Archive from working, by disallowing any access from the home page on down. Requesting that page right now returns the following additional meta-data along with the above text:

This indicates when this change was made. But don’t take my word for it. Ironically, the one thing you can still do with the Wayback Machine regarding foodbabe.com is verify that the robots.txt file was changed to add those lines on November 12, 2014. Simply compared the archived copies of the file before and after that date.

Food Babe versus Do Not Link

This brings me to the latest technical measure implemented by the Food Babe in her efforts to thwart skeptics. It involves the service DoNotLink, which I have recommended here on the blog on several occasions. It was brought to my attention by this tweet by Mary Mangan on Friday:

@krelnik Got an interesting outcome of a do-not-link today. Fluke, or issue? http://t.co/h00rqbyPHv FF on PC. Also on chrome.

The link in the tweet leads to a screencast Mary created showing a click on a DoNotLink URL that is supposed to take you to a Food Babe article. But instead it results in an error message of “Not authorized” as you can see in this screen shot.

Now to see what is happening, you have to understand a web browser feature called a HTTP Referer [sic]. Most times (but not always) when you click on a link, the identity of the page where you clicked is passed as your browser navigates to the new page. This is a courtesy feature, so webmasters can discover where visitors are coming from. This includes when you click on a URL shortener or framing service like DoNotLink. Most sites just log this information and do little else with it.

What FoodBabe has done in this case, is added code to her website that sends any incoming request with a referrer containing DoNotLink.com to an error page. Since it is largely skeptics using DoNotLink to link to FoodBabe.com, this briefly had the effect of breaking skeptic links.

I say briefly because I immediately called it to the attention of Menno Van Ens, the creator of DoNotLink. He very quickly made a small change to his software.

Now when you click on a Food Babe link from DoNotLink, if you watch carefully you will very briefly see this message:

Simple solution – the service now strips the referrer code when it sees your link leads to the Food Babe site. Thus the site doesn’t know where you are coming from, and it can’t decide block the link. (This is not a violation of any specification – referrers are a convenience feature, not a requirement. There are many other situations where they are intentionally omitted – if Food Babe were to block all of them she’d clobber her own web traffic).

As I’ve written many times when espousing the use of services like DoNotLink and RBUTR, these links do not do any harm to the target website. The site still displays normally, gets to show its ads, and records a page view. The link is still a working link. These link wrappers merely insure that the algorithms used by Google, Facebook (et.al.) will not turn skeptical criticism into tacit votes of approval.

The only thing the Food Babe accomplished by attempting this block is denying herself some page views and ad hits, and very briefly annoying the few skeptics who noticed.

The Food Babe is clearly bothered by skeptical criticism, and lashes out at skeptics with these attempts to squelch our commentary. Since she has a degree in computer science, it is not surprising that she might turn to technical measures.

But technical countermeasures like these are only stopgaps, they cannot prevent skeptical criticism. Alert skeptics can still preserve copies of posts by Food Babe and other purveyors of nonsense. We just have to be alert enough to gather these archive copies manually, using services like Archive Today, WebCite or FreezePage.

In her response to critics in early December, Ms. Hari admits that her microwave blog post was “not my most impressive piece of work” and that she “made a mistake about oxygen inside airplanes.” It is good that she admits her mistakes, but quietly deleting the content and attempting to prevent others from criticizing her is not the correct response. In the same post she writes:

Updated 1/16/2015: As is traditional in print journalism, I am going to start a Corrections/Editor’s Note feature on my web site. I want to be sure that if there are any mistakes, we admit and correct them immediately.

It has been 25 days since that update (and many months since the two posts were removed) – and yet the promised corrections feature has not appeared. I for one am wondering when the Food Babe will stop fiddling with technical attempts to annoy skeptics, and actually make good on her promise of some transparency around corrections.

Thanks to Mary Mangan for calling this to everyone’s attention, and Menno Van Ens (the creator of Do Not Link) for quickly coding a workaround on a Saturday!

Updated to correct some grammar errors and clarify the use of propylene glycol.