In 2012, Google introduced a feature to their search engine they call Knowledge Graph. The company has compiled millions of facts into a database, and offers them up on the right-hand side of search engine result pages in a handy box. The graph is also the source of many of the answers you get in the voice response versions of Google, such as in Google’s smartphone apps.

The answers come from many sources including the CIA World Factbook and Wikipedia. At the time this was launched, I wrote how skeptic efforts editing Wikipedia were paying off in a new way, exposing the public to skeptics and skeptical topics in these knowledge graph boxes. 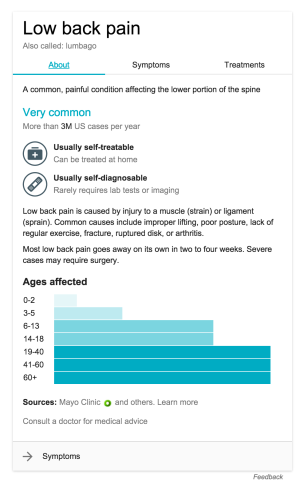 On February 10 Google announced an enhancement to this product, adding a whole new class of data – answers to medical questions. As they explained in their introductory blog post:

We worked with a team of medical doctors (led by our own Dr. Kapil Parakh, M.D., MPH, Ph.D.) to carefully compile, curate, and review this information. All of the gathered facts represent real-life clinical knowledge from these doctors and high-quality medical sources across the web, and the information has been checked by medical doctors at Google and the Mayo Clinic for accuracy.

This has a great potential to combat the infamous “Dr. Google” syndrome. This is a popular term for the tendency of incorrect or even pseudoscientific information, by virtue of its prominence in the search engine, misleading the public. Who can forget the 2007 sound byte from the Oprah Winfrey Show, when Jenny McCarthy stated, “The University of Google is where I got my degree from“? How many others are out there learning incorrect info from bogus websites pushed up into the Google results via SEO techniques?

Many different studies have shown that search engine users rarely move beyond the first page of results. Thus the placement of these knowledge graph results prominently on the first page of results might have a good effect. It remains to be seen whether these knowledge graph boxes will help draw attention from potentially dangerous organic search results.

You can recognize the new additions because they typically appear in boxes offering separate tabs on general info, symptoms and treatments. They also always contain advice to consult a medical doctor for advice. (See diagram).

I searched several medical topics and was pleased that I could not find any in which alternative medicine had been included. For instance, the lower back pain topic shown here does not offer acupuncture or chiropractic as an option. This is a good sign, but skeptics should keep an eye on this feature. I’m sure the alternative medicine community will eventually pressure Google to include their nonsense.

If you do notice spurious alternative medical information appearing in one of these results, you can click the word Feedback at lower right. The box will highlight and show a prompt to click on the error. You can then select which piece of information is incorrect – you will be prompted to explain why you think it is wrong.

Morning Toolbox is a daily digest of interesting tools and techniques that skeptics can use online.

Online awards may seem silly, but they can really help your favorite web sites and podcasts gain visibility, which is good for skepticism. Voting is open on the Stitcher Podcast Awards and many skeptic favorites like Skeptoid, Skeptic’s Guide and Geologic Podcast are nominated in various categories – along with other good podcasts like RadioLab, StarTalk and so on. You can vote once per day. It does require a Facebook “Like” from you, so you’ll need an account there, but they don’t spam you as far as I can tell.

CSICOP founder Paul Kurtz died over the weekend. When people are in the news or die, that is a key time that their Wikipedia articles get vandalized. Fear not, Susan Gerbic and her team leapt into action.

Remember how Google’s Knowledge Graph has given added visibility to skeptics in search results? Well now Google is adding “explanations” to the related people displayed below. It’s mostly actor and actress appearances now, but I’m wondering what the explanation for James Randi below Sylvia Browne will be?

Chrome browser plugins like Fishbarrel and RBUTR are key skeptic tools. If you’re switching to Chrome to take advantage, here are some tips to get the most out of Google’s browser.

A short toolbox, have a good day!

Last week Google introduced a new feature to their flagship search product, which is called Google Knowledge Graph. I believe it has only rolled out for users in the United States so far, so you may not see it if you live elsewhere, yet.

There are several interesting aspects of Knowledge Graph, and I encourage you to read more about it. The technology behind modern search engines is surprisingly complex, and this is the latest advancement.

But one of the main user-visible features of this product is a panel that you will see on the right side of many search results. This panel shows a summary of what Google believes you are looking for.  The aim is that many times the answer you seek will be right there on the results page.

Because this new feature draws a great deal of information from Wikipedia, all the great effort by Susan Gerbic and the other skeptics who work on her skeptic Wikipedia project is now paying off in yet another big way.